For a country that once produced 90% of the goods it consumed in the 1960s, today is a stark difference when you go shopping everywhere from Walmart to Bloomingdale’s and struggle to find goods made in America. Despite manufacturing employment falling 34% since the peak in 1979, the Federal Reserve reports that real manufacturing output rose 90% over the last 40 years. While manufacturers have upgraded their machinery to remain competitive, such an increase in production seems implausible given that the U.S. barely manufactures entire industries of goods that it once dominated, such as clothing and electronics. However, our eyes are not deceiving us. If not for the skeptical changes made to the Consumer Price Index (CPI), the Fed would not be able to report real increases in manufacturing output.

This study provides alternative manufacturing data based on the original CPI method that shows that output has significantly declined by about 73% since its peak in 1988. Furthermore, this study logically proves that America’s decline in manufacturing is not caused by automation and outsourcing, but by an increase in inflation and regulations, combined with a reduction in savings. 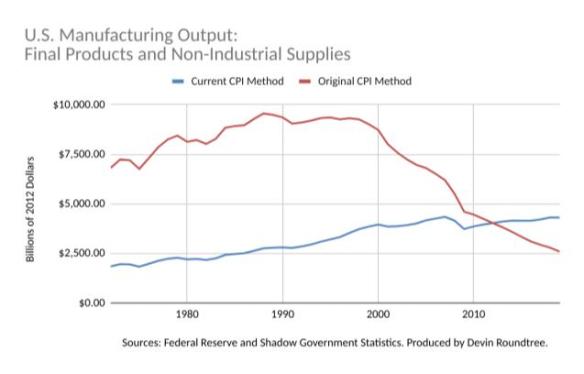 Given the data in this study is based on the controversial, yet well supported, alternative CPI data provided by Shadow Government Statistics, the existence of a decline might be seen as misleading. However, a closer observation of the Fed’s data can expose its gross inaccuracy. For example, the Fed reports that annual output of automotive products supposedly increased 130% in real terms from 1980 to 2010. But during that time, the number of automobiles made in the U.S. actually fell 3% while foreign made inputs increased from 16% to 29%. Nonetheless, the data presented should be regarded as a rough estimate. Real manufacturing data should be based on the Producer Price Index, but the PPI has been manipulated similarly to the CPI and there is no alternative available. The remaining question is what caused the decline.

Causes of the Decline

Myths Behind the Decline

America’s decline in manufacturing employment is universally acknowledged, however most economists believe it’s due to automation, outsourcing to cheap labor abroad, and even economic progress. These arguments are fallacies. In a free market, machines are not labor saving devices as much as they are labor enhancing devices. Automation increases worker productivity and reduces the cost of production. The usual effect is a reduction in consumer prices which actually leads to an increase in demand, and businesses respond by hiring more workers to expand production.

With regards to the “cheap labor” theory, manufacturers are not fleeing America because wages are lower in East Asia, but because the cost of production is overpriced in the U.S. due to regulations and inflation. The reality is that an increase in worker productivity reduces the marginal cost of employment even as wages rise. Henry Ford’s marginal cost of labor was lower when he paid workers $5 per day versus $2.50, because the innovation of the moving assembly line reduced production time from over 12 hours to 2.5 hours per car. The “cheap labor” theory today is merely the resurrection of the erroneous labor theory of value.

Lastly, it is impossible to claim that the fall of manufacturing and domination of the service industry represents economic progress. When people left farms and entered factories during the Industrial Revolution, their incomes increased substantially. The same cannot be said when people traded their factory jobs for those at Walmart.

The Future of Manufacturing

While consumer goods get all the attention, the majority of U.S. imports are capital goods. Yet unlike during the Industrial Revolution, America isn’t running up trade deficits in order to expand its productive capacity, but simply to sustain its current output. This means that any significant reduction in imports will affect the manufacturing industry. While the Great Recession exemplifies this, there is a much larger collapse waiting around the corner. The dollar’s role as the world reserve currency is diminishing at this moment, and America’s historical debt binge is inevitably setting the country up for one of the most significant economic collapses in history. Unfortunately, America’s manufacturing industry will go down with the ship as real wealth shifts towards East Asia, the true global leaders of manufacturing.